Construction Roundtable: Company Culture and the War for Talent 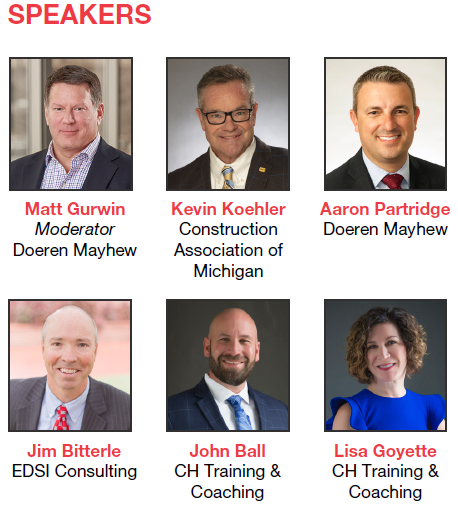 Supply chain issues, rising fuel costs, and a labor shortage are measurable issues affecting the construction industry today. Each sits nicely in a graph and spreadsheet. Harder to measure, yet increasingly important, particularly to younger generations, is a company’s culture.

These were the topics discussed on June 22nd at the Construction Association of Michigan’s latest industry roundtable, titled “Winning the War for Talent by Managing Personal and Organizational Adversity.” The event’s experts in the field included Jim Bitterle of EDSI Consulting and John Ball and Lisa Goyette of CH Training & Coaching and Aaron Partridge of Doeren Mayhew. The event was moderated by Matt Gurwin of Doeren Mayhew.

Regarding the purpose of the roundtable sessions, CAM President Kevin Koehler explained: “We get industry thought leaders together to discuss issues keeping them up at night. That allows us as an organization to take that information, dissect it, and think about ways forward to not only help the contractor community but all members run a more efficient business.”

Attracting and maintaining talent is a critical component of the industry. According to the U.S. Bureau of Labor Statistics, the construction industry had a 56.9 percent turnover rate in 2021. Combined with a shortage of skilled trades workers, the industry must adapt to acquire and retain a new workforce motivated by new values, including the desire for more flexible workplaces.

Although working remotely isn’t new, the COVID pandemic forced all employers to put proper procedures and technology in place if they wanted business continuity. And employees, particularly the young and tech-savvy, still want to and expect to continue working from home. This issue of generational change in workplace expectations is a force that cannot be ignored.

“This conversation wasn’t happening five years ago, let alone three,” said Ball. “It is refreshing to see business leaders of a generational mindset saying ‘We need to figure this out and engage in conversation and dialogue about what this means.’”

Regarding the labor shortage, the numbers speak for themselves, Bitterle said. “You have got 11.6 million open positions within this country, and we are almost to the point where there are two open jobs per every job seeker. And there is a massive skills gap, where construction is probably the hardest hit of all of our country’s industries. It’s a different world, and there are going to be winners and losers.”

A good example of a company navigating this divide is Costco,” Bitterle said. According to the U.S. Bureau of Labor Statistics, retail leads with the highest turnover rate at 90 percent. “Yet Costco has a turnover rate of just 6 percent. That is because they know how to attract and maintain a great work culture,” he added. “You guys can do the same thing within the construction industry.”

Goyette feels that it’s important for employers to develop “soft skills” of vulnerability and empathy. “This is a skill set that is often overlooked. Soft skills allow people to be better developed.”

A Generational Gap Accelerated by the Pandemic

With the boom of smartphones, social media, and a more connected world, the millennial and Gen Z generations are now the driving generation in the workforce. Combined, these generations comprise half of the American populace, according to U.S. Census Current Population Survey data.

“We used to say the tsunami is coming in terms of generational dynamics. It is an understanding that any time there is a cultural shift, it is usually driven by generational confusion of values, mindsets, perspectives, and experiences,” Ball said.

“Primarily speaking, we have a generation of young people who observe our [the older] generation’s mentality and have seen that you have been faithful to a company, but the company has not been faithful to you. And this isn’t a life they want to live.”

“Relationships, experiences, and the values they hold are a big part of this conversation,” said Ball. “How do we adapt as business leaders in a place we can coalesce and engage in a meaningful relationship?”

The pandemic’s acceleration of this generational shift in the workplace can be measured by how many left the workforce. According to Bitterle, during the first 12 months of the pandemic, we lost 7 million Baby Boomers and one million women. “This is a long-term problem,” Bitterle said. “There are going to be organizations that can’t grow and will shrink and fail because of the inability to attract and maintain talent.”

“Creating trust in the workplace doesn’t have to be difficult,” Goyette said. “I came out of the aerospace engineering industry, which is a male-dominated industry. I adopted a baby from China, and I was out for weeks. I went back to work and felt like every day I walked into the office and got cold-cocked. Every day someone was coming in saying, do you have this done yet? I was absolutely overwhelmed and pulled in all directions.”

Then a call from the vice president of the company came in. “I’m thinking he is going to want to go through all the programs I am responsible for. What he said was ‘Tell me what it is like to be a new mom.’ It wasn’t at all what I expected, and he just asked me questions about myself. It was so personal and relational and vulnerable. I was able to be transparent and honest. I walked out of the office feeling seen as not only a project manager, but as a mom,” Goyette said. “I grew a new form of respect for that man exponentially because he cared about me.”

“So if you have employees who walk into your company and you truly give a damn about them, that is something you can't put a price tag on,” she said. “That is one of the biggest things companies are missing.”

Ball added, “A relationship is about meeting each other and having a conversation. It is a marriage where we have to understand the hopes of the other. It is also acknowledging the fact it is a shared responsibility as well.”

“The first step in changing workplace culture is defining what the current culture is,” Bitterle said. “Then come up with your aspirational culture. What do you want that to be? What do you want your employees to say about their work? Then it is a process of change toward that goal.”

This goal can be measured with a dashboard, he added. “We measure engagement, morale, turnover. Then you get your managers in line with that goal. Most cultures have evolved to what they are over years.”

For Goyette, changing culture starts with communication. “We teach people to be assertive communicators. It’s speaking your truth while being respectful of the person sitting across from you. It’s understanding that their communication style may be different than yours. When we are hoping to get the best out of a situation, sometimes we have to cross the invisible line to meet you where you are at. The hope is you will come back to the middle. It’s saying ‘I care about you to go the extra mile to learn about you. I’m going to be assertive. I’m going to ask questions to see what you need to do to do your job.’ It’s teaching the art of being assertive, transparent communicators.’”

The importance of communication has real-life consequences, according to Ball. “We were working for an engineering department with a problem-child employee. We find out this individual’s dad passed away and not one single person asked him how he was doing. They knew he was out for two weeks, he had to liquidate properties in Florida and bring his mother back and into a care facility. No one ever asked him how he was doing. Not one single person.” Simple check-ins go a long way, Ball said.

“What we are seeing with confusion generationally speaking is managers saying ‘I offered him a $10,000 raise, and they still didn’t take that and left.’ What is missing there, and what is truly driving this, is relationships. For them, it’s the question: ‘Does my employer care about me?’”

From Roundtable to Workplace

Attendee and co-founder Lawrence Walters of audio-visual contractor AV Imagined may not have been the biggest contractor in the room, but he said that the information on workplace culture is crucial for his growing company. “We are a low-voltage contractor doing smart homes and office build-outs. Our whole business is based around hiring to culture,” Walters said. “We built up a whole onboarding process for employees.”

For Walters, culture sometimes trumps experience in the hiring process. “We are looking to hire someone who fits into our company more than just experienced people. We are looking for employees we can invest in and grow with. It’s a unique way to go. A lot of times when we hire very experienced people, they have a set mindset of doing things and trying to impart that to the business. We want someone who is part of a team.”

Fairness comes into play as well, and how it can be different for each individual's needs. “When we talk about fairness, you might have two guys out of the eight who care about fairness and motivations,” said Walters. “We have to understand that different people have different reciprocity.”

“As far as the communication guidance we got today, it’s huge,” Walters added. “We’re small compared to most people at this table, but it’s important to watch how these companies take entrenched cultures and try to shift them to new generations.”

All of the presenters agreed on the primary drivers of a positive workplace culture: flexibility, communication, a sense of purpose, competitive wages, and, most importantly, a solid relationship between department leaders and the rest of the team.

In future sessions, CAM and Doeren Mayhew will take a deeper dive into leadership development and best practices for changing a workplace culture.

If you are a business leader interested in participating in a future roundtable, send an email to cam@buildwithcam.com. 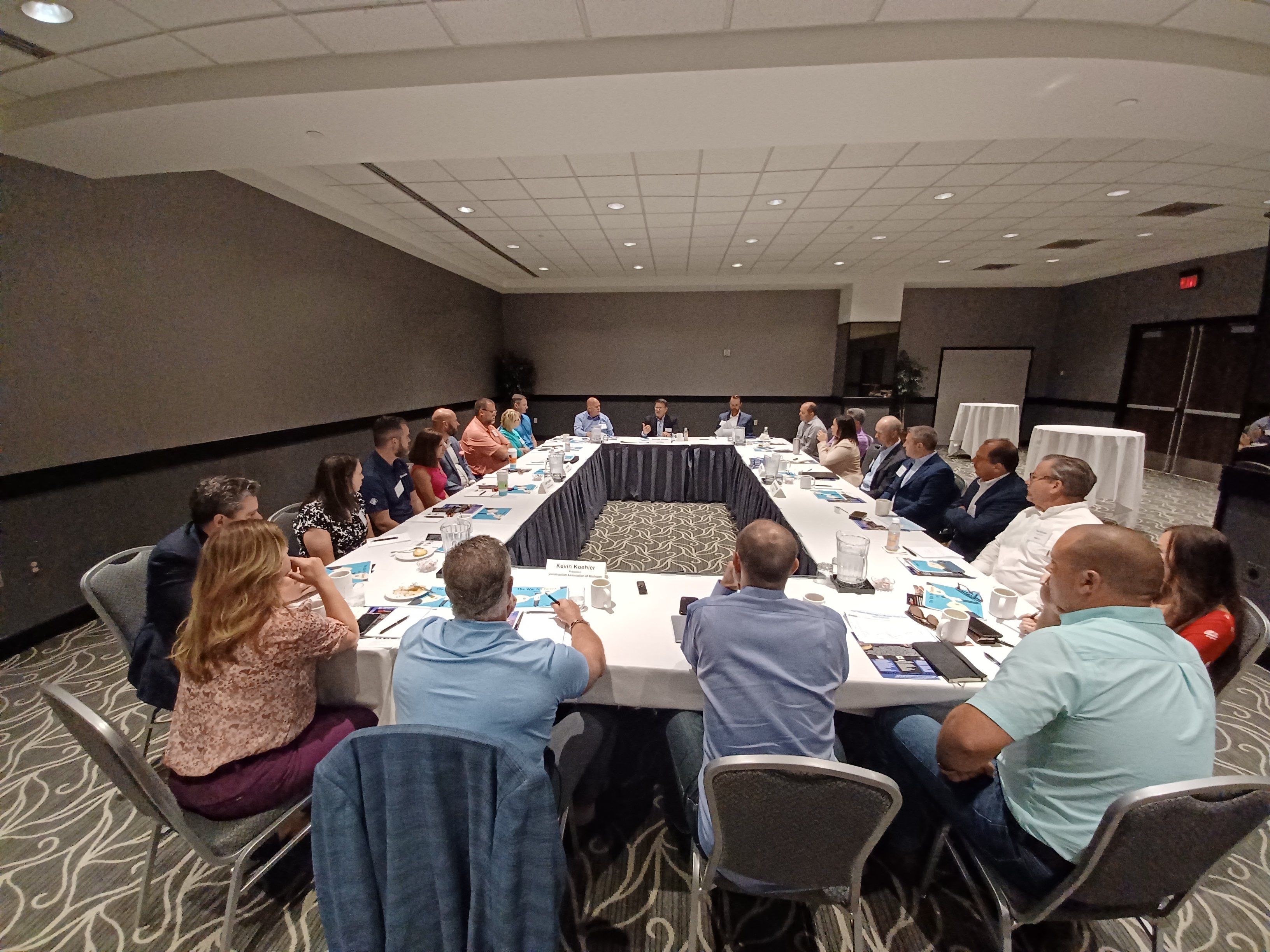 Dennis Burck, Construction Association of Michigan’s Prebid Reporter and Editorial Writer, earned a BA in journalism from Wayne State University in 2017, spending two years as a new development and general assignment reporter for the Lansing City Pulse. At the Pulse, Burck was tasked with writing the paper’s “New in Town” column, tracking commercial and city developments from construction to completion. His work also appeared in the Detroit Metro Times, Metro Parent, Model D Media and the National Endowment for the Humanities’ magazine.